From Esplanade Terminal, we boarded the Sun Cruises ferry at 7:30 am. The ferry was large enough to accommodate up to 280 passengers and it’s somehow similar to the boat when we went to Bintan, Indonesia from Singapore. There are two decks in the boat, the upper deck, and the lower deck. Of course, there are better views on the upper deck. I only explored the boat for a short time and since we didn’t have much sleep, I went back to my seat and took a nap. When I opened my eyes, we are almost near Corregidor Island. Upon docking, we collected our bags and headed down to the island and took a welcome drink from the table where a crew was waiting. Also, I was quite surprised since I did not expect Corregidor Island to be a large island. I thought it was big enough but it was not, it’s a huge island, and there are a lot of trees and some wildlife in the area too! 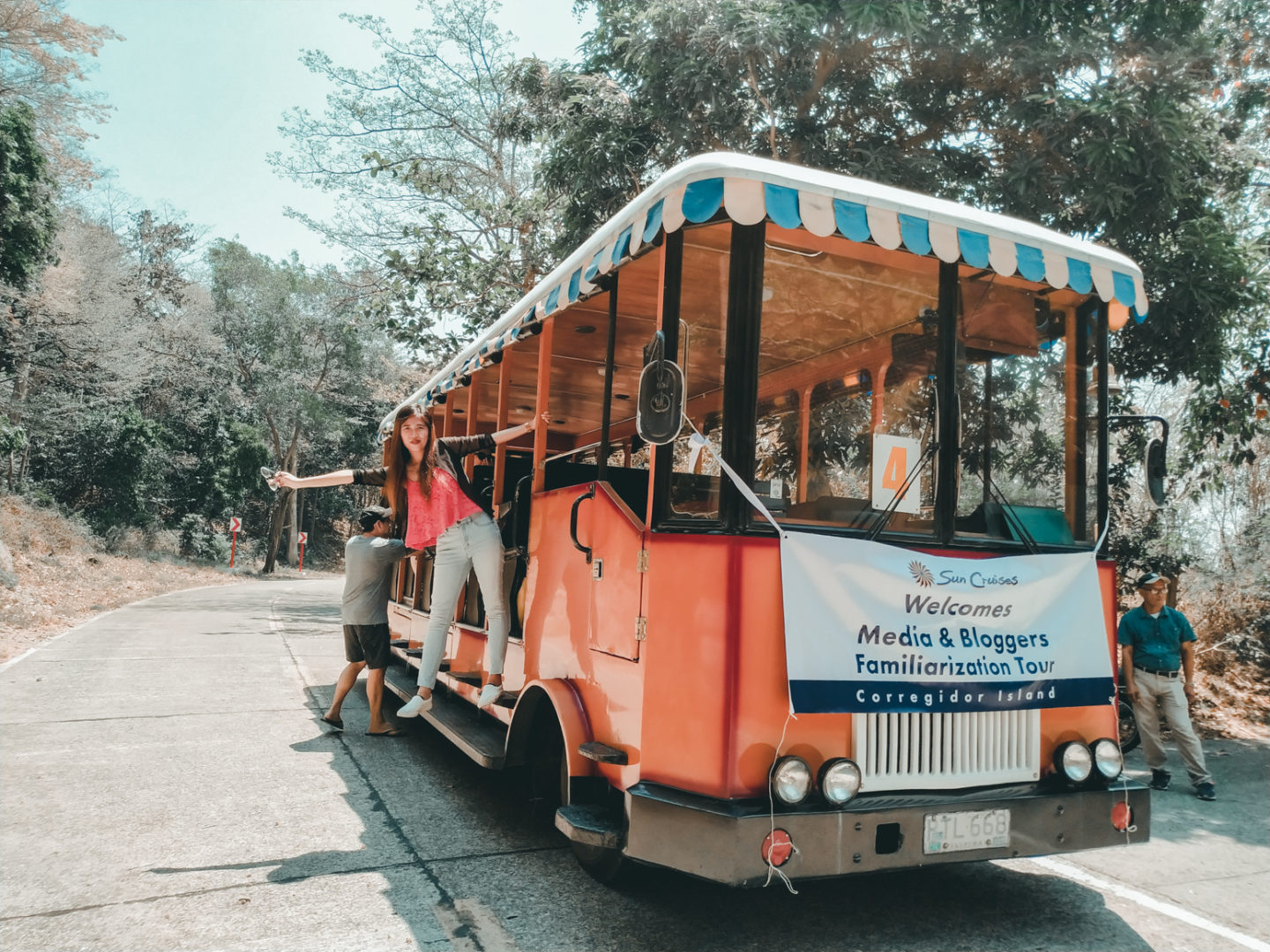 After taking our drinks, we all went to our designated tram, the vehicle used in the island for transport, and started our Corregidor Historical Tour.

For the Corregidor Historical Tour, we went to the following places: 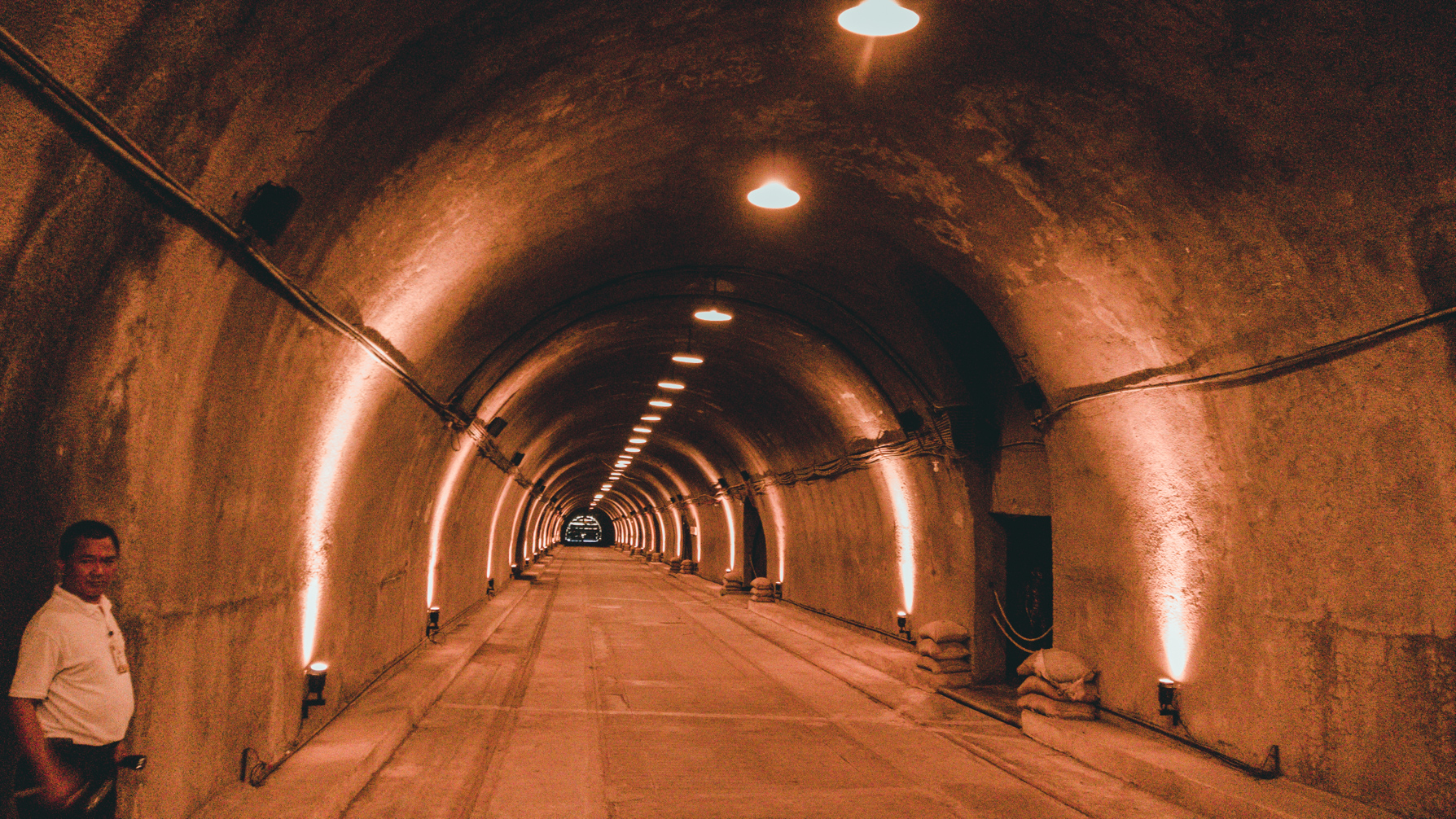 The tunnel got its name from the word “linta” meaning “leech” in English. The area was previously flocking of leeches that’s why it’s called “Malinta”. Here, we went inside to see the lateral connections of each tunnel and how it functioned as a base camp for the Filipino and American soldiers during World War II.

Later on, we also went back here for the Malinta Tunnel Lights and Sounds Show featuring what happened during the war. 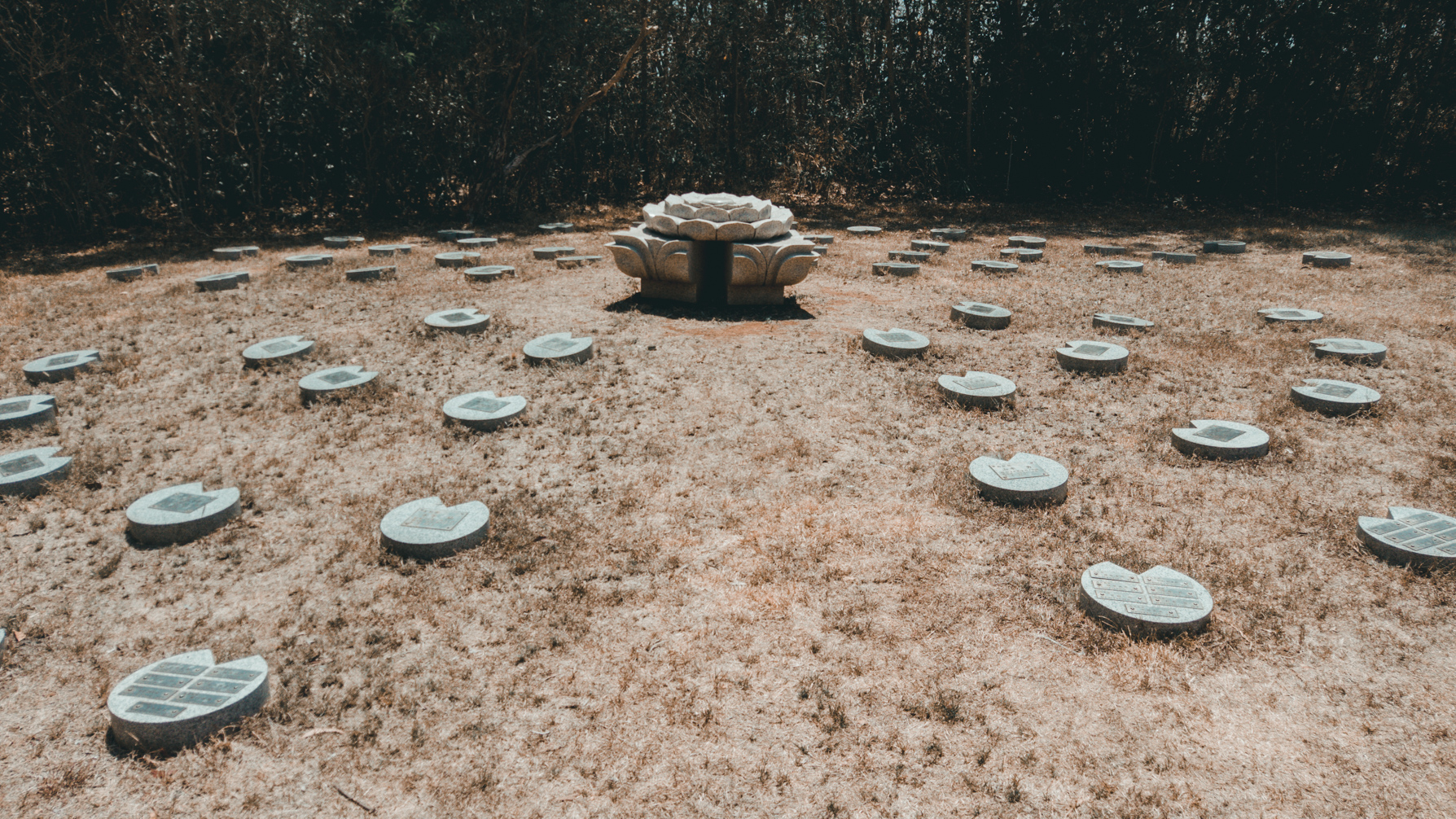 A place where some of the Japanese soldiers were buried. My friend, Tina, didn’t like the place as she sensed some bad vibes in the area. It’s also where a souvenir shop is located. You can take a quick picture here as it spots one of the iconic statues in the area.

We only went here to see how the airfield looks like. Only small planes can land in Kindly Airfield. A landmark which honors the courage of Filipinos who fought for sovereignty. It houses a museum on one part of its end and holds old photographs of the late President Manuel L. Quezon, a miniature structure of Corregidor Island, and a few portraits and photographs during the World War II.

This landmark also honors the Filipino Women who fought side by side with the soldiers. 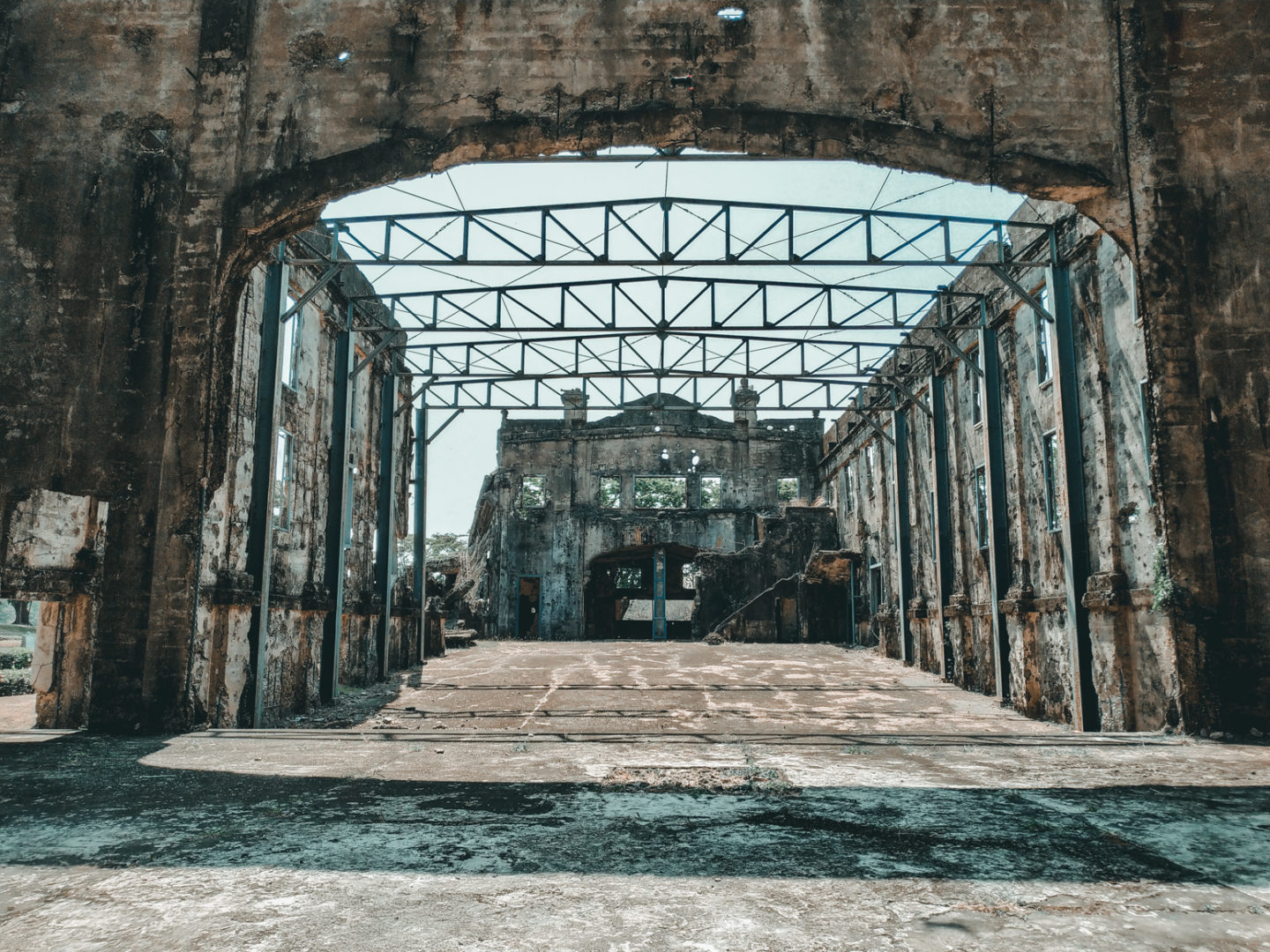 It holds remnants and pieces of important belongings and events happened in Corregidor Island during World War II. There are areas dedicated to the letters of American soldiers to their families, one was for the weapons used during the war, and a few other more. Veteran American soldiers sometimes are also visiting the Pacific War Memorial Museum and look into the photographs when they were still young, reminiscing the memories of the old island. 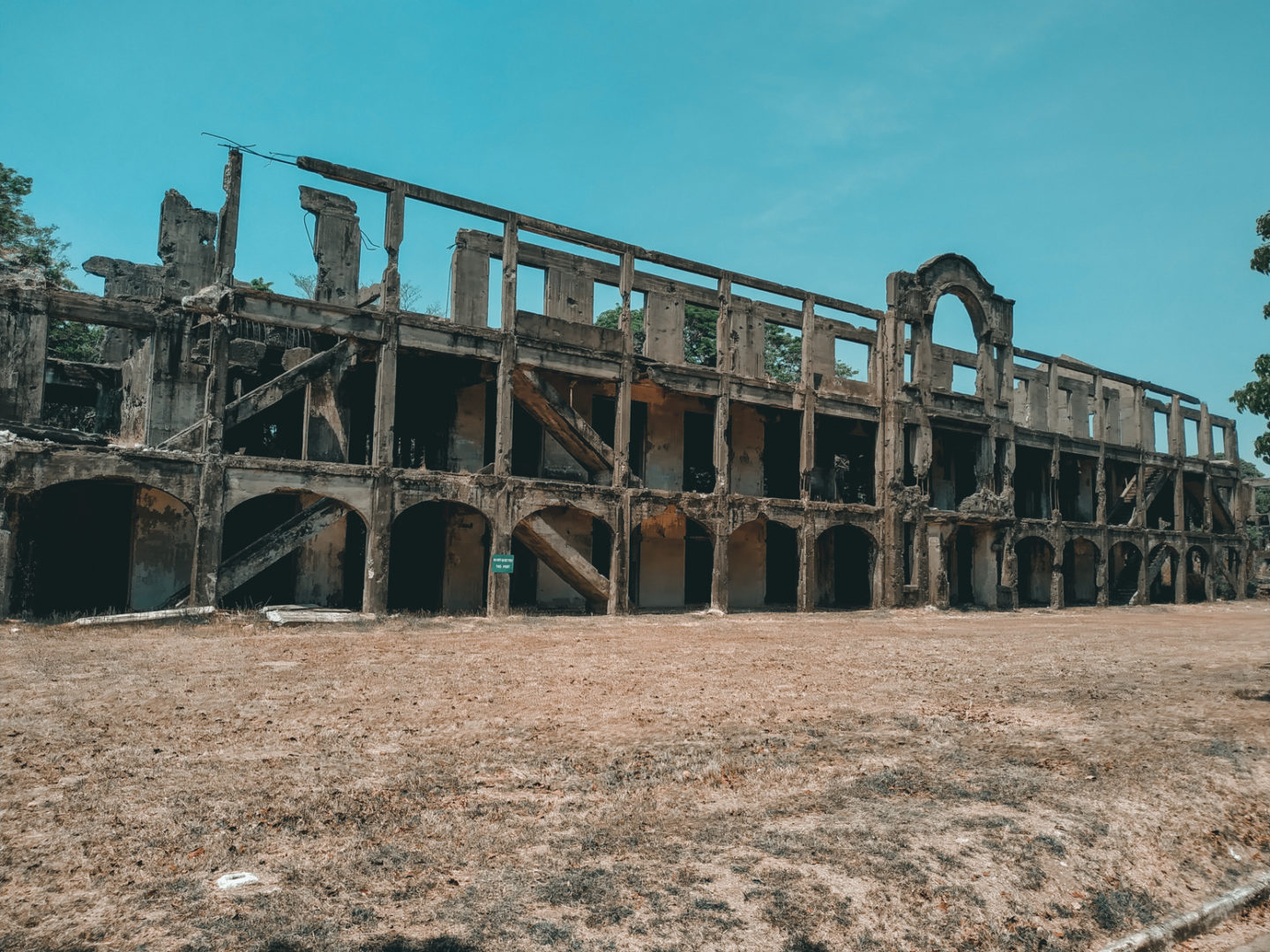 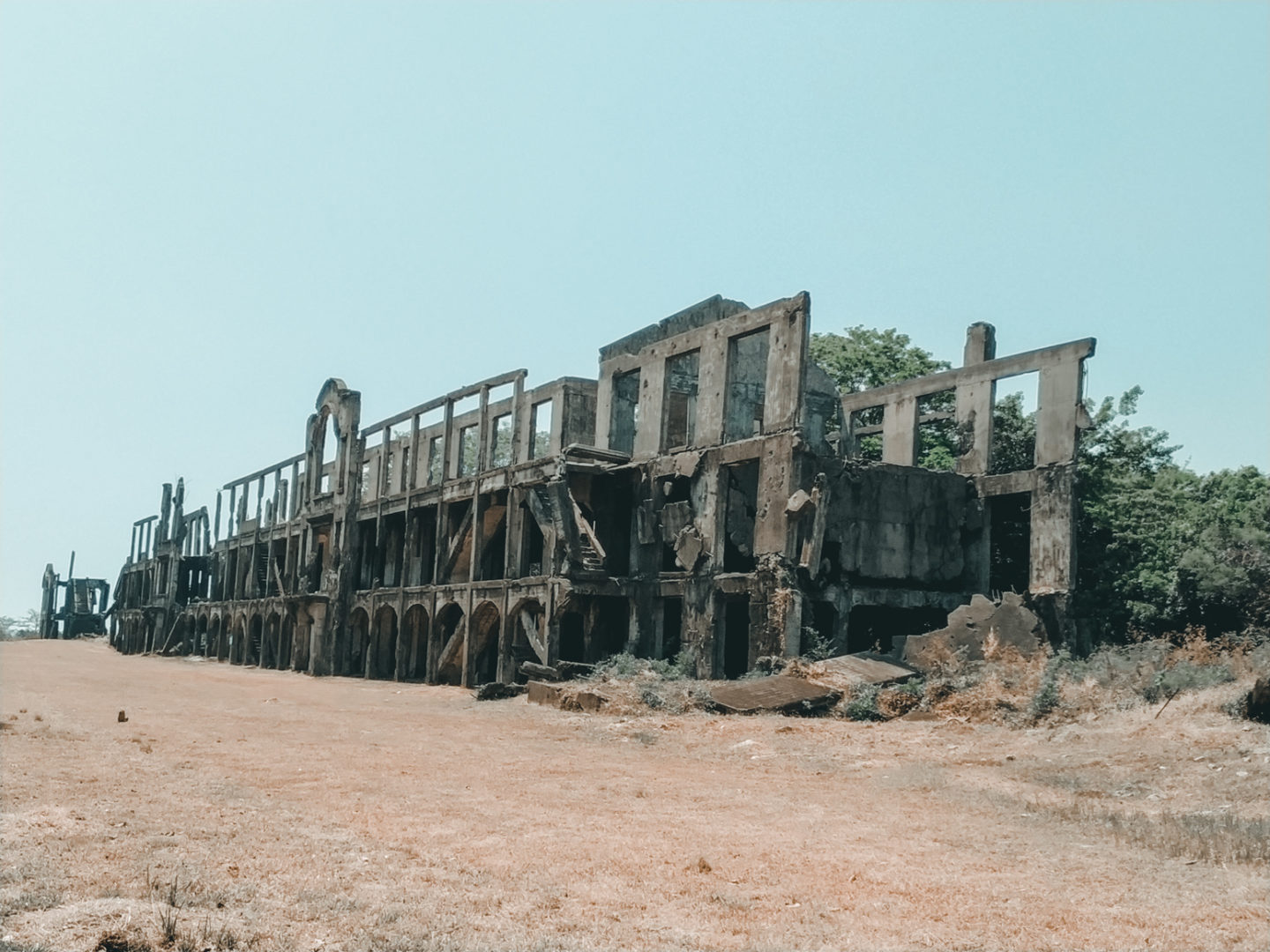 After the museum, we’re headed down for lunch. Our next tour will proceed at 5pm.

Where to Stay in Corregidor 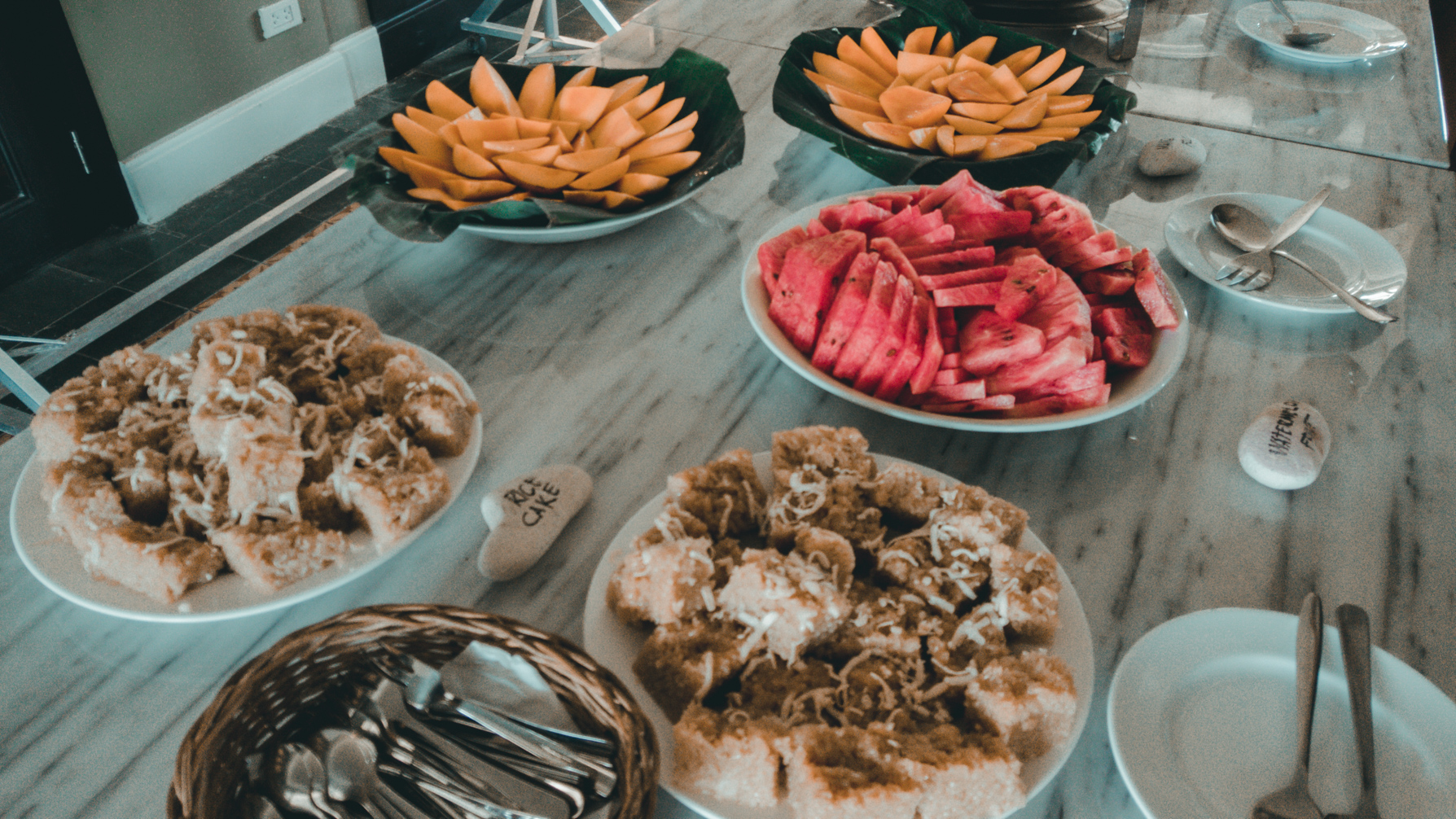 Corregidor Inn has 31 rooms nestled in the lush greens area in the center of the island of Corregidor. It’s the best hotel on the island as it is the only one there. There are three types of room, a single room, twin room, and a family room. Jane and I stayed in a Twin Room. 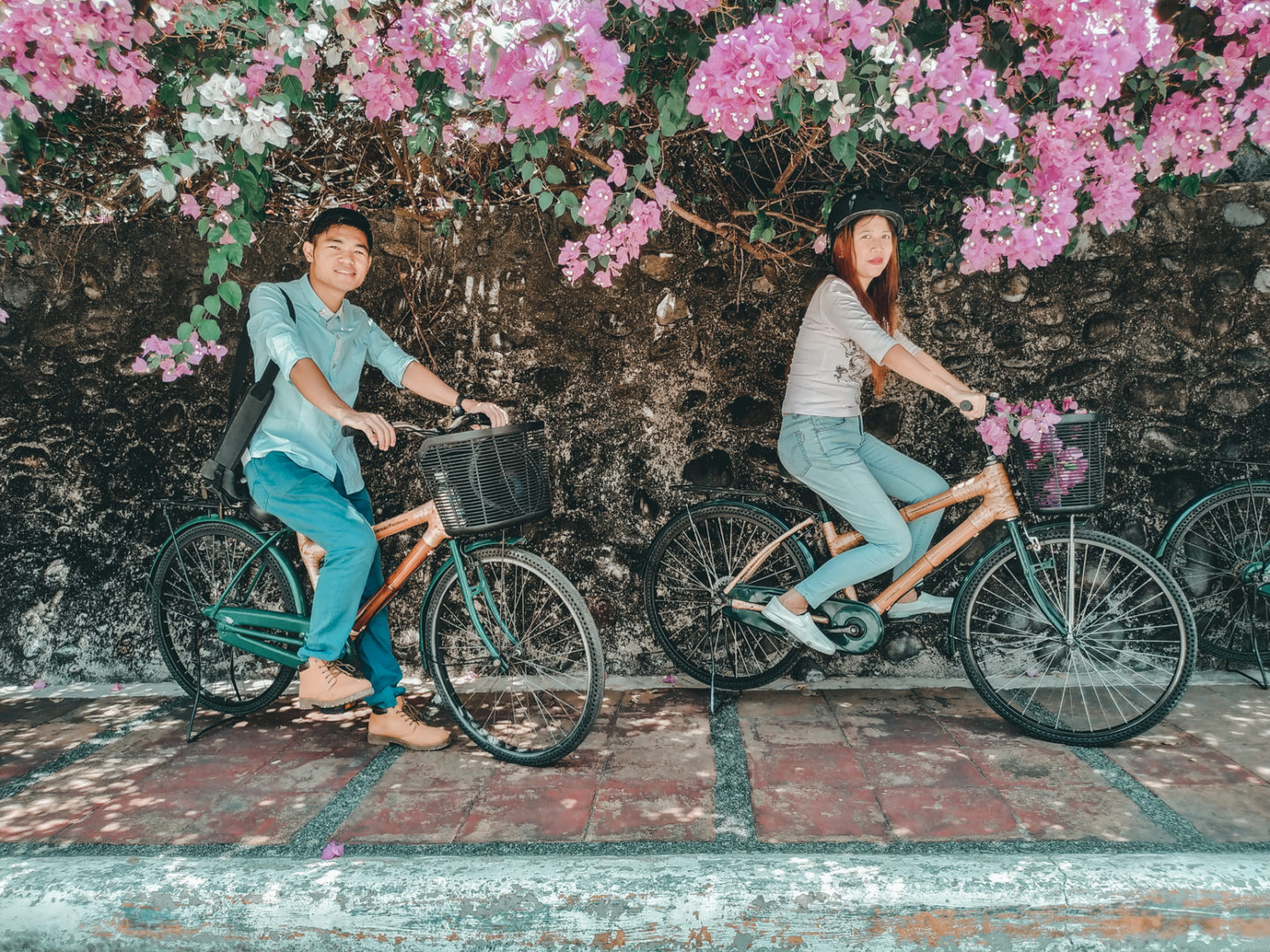 Before you went up to the hotel or the restaurant, you will find these beautifully blooming flowers called bougainvilla, and a good spot for a flowery photo.

The Twin Room has two beds, a table with the coffee and tea amenities, air conditioning, and a hot and cold shower. It’s not a big room but just enough for a maximum of people to sleep. There’s also plenty of sunlight when you open the curtain, so keep it closed during the day, but it has great views of the ocean area.

The aesthetic in the room was really nice and really homey. The most notable thing I noticed is the high ceiling that makes the place cooler than it should. I’m just really amazed at that. 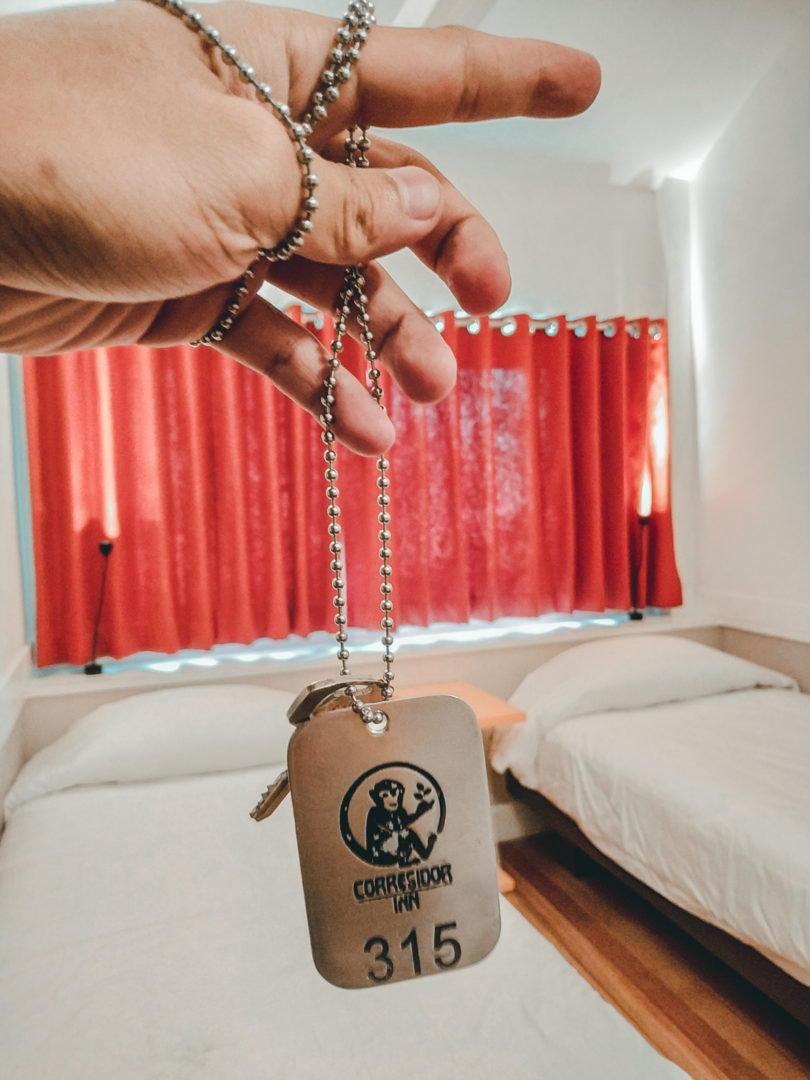 Since Jane and I didn’t have enough sleep the last night, we went to sleep after a short while and put on an alarm at 3:30 pm since the next tour will be at 4 pm for the Sunset and Night Lateral Tour.

These batteries are named after higher rank officials, hence, Hearn and Way. These are the cannon areas that have been used in the war. 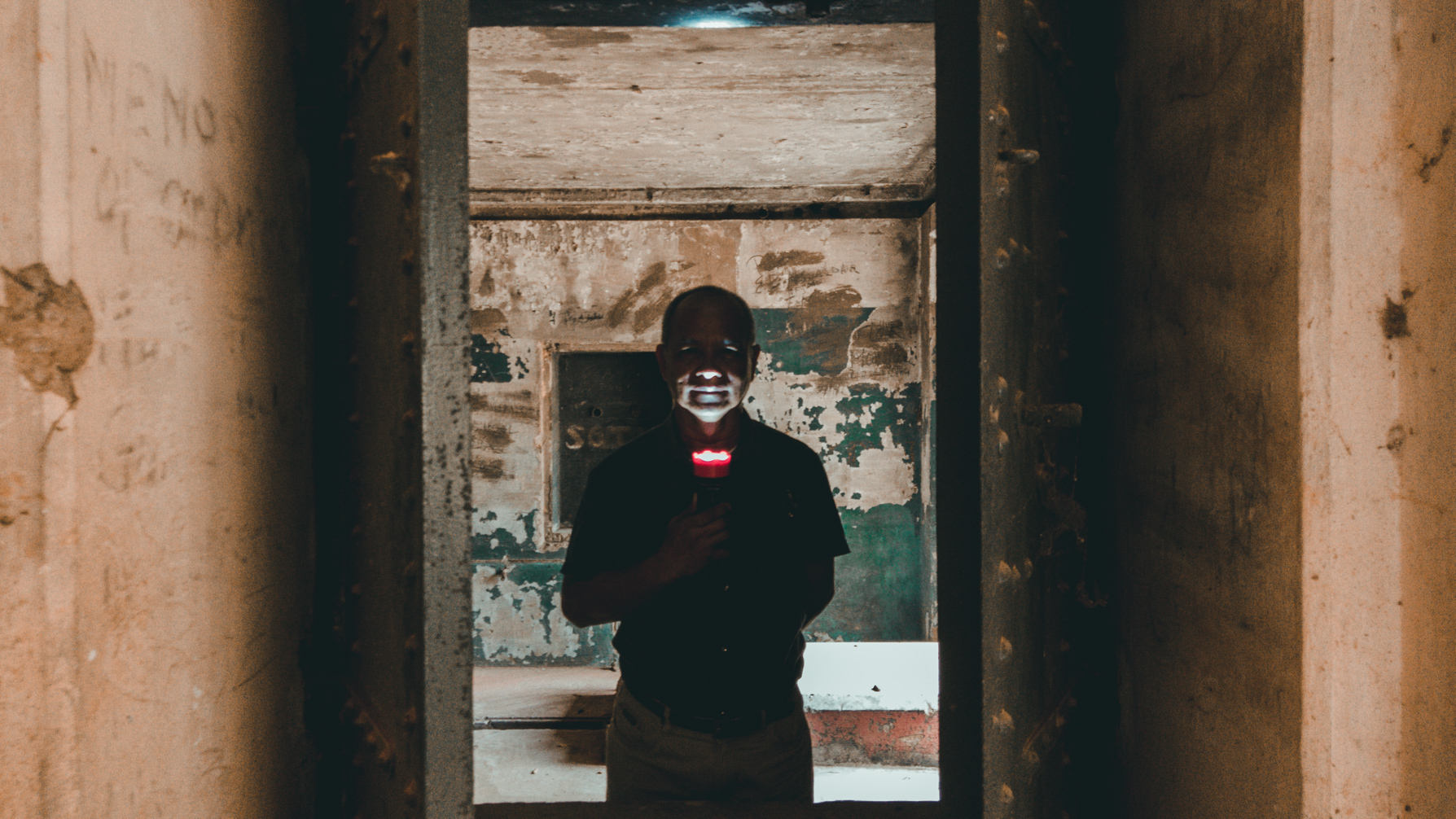 Battery Way has 4 cannons, two in an upright position and another two in a passive position.

Battery Hearn is known to be the largest cannon in the island. There’s even a spare cannon barrel at its side. You will also see how big a cannon’s bullet is! Before sunset came, we went first to the Hospital to see it personally. Of course, we would know that the hospital could be the creepiest place to be in Corregidor as many soldiers and even health attendants died in it. Even our friend, who can feel the negativities, could feel that the place is somewhat eerie. Being at the ruined hospital gives you chills. If you are looking for ghostly presence, the hospital might be a good place to see. If you don’t want anything creepy, then go to the hospital at mid-day so you can explore more of the place. 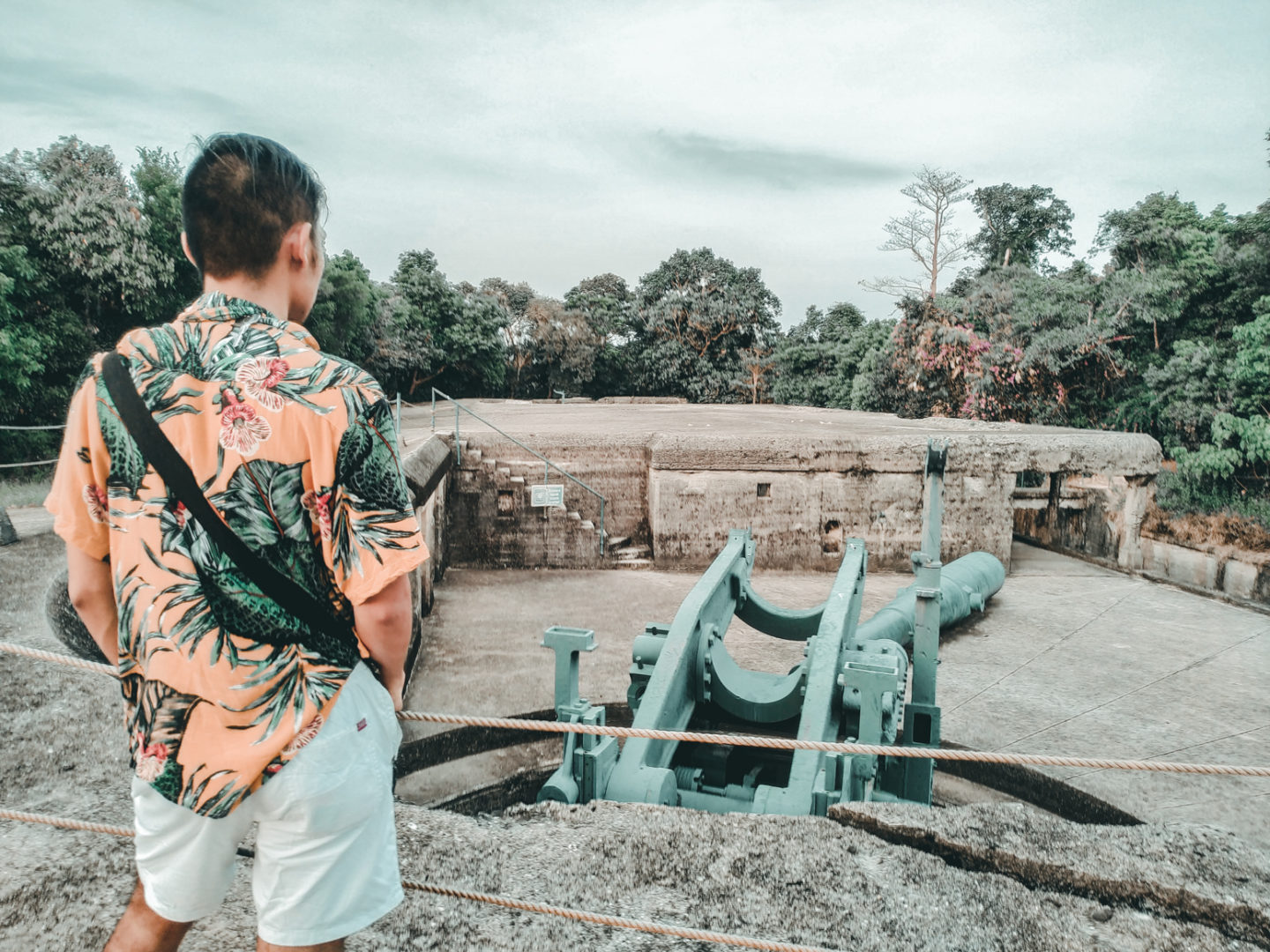 After touring and taking pictures at the hospital, we then went to Battery Grubbs to see the sunset. Battery Grubbs is also a base for the cannons and also a primary spot for defense if there are enemies roaming around the west area of the island. This is the best spot for seeing the sunset and you can take pictures or camera tricks as the sunset usually tends to be a dramatic one. Our team went to Malinta Tunnel by the evening after the sunset to take a look and experience what it’s like to be inside a no-light tunnel. Yes, we went inside the tunnels in the dark. If you do have phobias in the darkness, you better stay at the tram. If you are quite a curious one, you should definitely see how the Night Lateral Tour goes.

We went inside one of the laterals in the tunnel and we were really surprised at how big the tunnel was. It’s like a maze if you don’t know the place to go. The feeling was also quite eerie but manageable. Our tour guide definitely knows every corner of the tunnel. There was even a bone remain laying on the ground and he said that it was a legit bone.

To further experience the darkness and how it felt like being in the tunnel, we switched off our lights and were in silence for one (1) whole minute. It was one of the activities you will do once inside. Now, if you are to do this activity, I highly suggest that you keep your fears out of your head or think of happy thoughts while silence occurs. When you draw negativity, the negative energies are then going to be bound to you which makes your thoughts even go wilder.

We also went to the nurses’ area (nurses’ tunnel) where it smells like there’s still some medicine left in the field. It reeks of alcohol and mixed medicine smell. Weird, but it’s the reality there. Near this area is where we did the same activity with total darkness and silence, but this time, we’ll be walking straight towards the nearby exit. The experience was creepier as that part of the tunnel was believed to be the laying grounds of the soldiers when they are being attended by the health attendants.

It was an actual relief when every activity was finished and we all went back to exit the tunnel. The Night Lateral Experience was really one of the best tours I experienced in Corregidor. If you have a curious mind, you definitely should try this tour as it is full of excitement and new discoveries. We all went back to Corregidor Inn after the Night Lateral Tour and had our dinner with a boodle fight setup. Our friends also had their videoke session after eating while I continued to work with my articles. We also need to wake up early to catch the sunrise. The sunrise tour is an optional tour but you can also add it to your experience. We needed to wake up early to catch the sunrise. The sunrise can be best seen near the Pacific War National Museum.

After catching the sunrise, we also went to another tunnel with a short trek, just near where we catch the sunrise. It was a small tunnel, maybe around 40 meters long. Unlike the Malinta Tunnel, this one is totally different. It’s like a base to hide from the enemies or hidden storage. The tour to the tunnel was short but was fun. We went back to the Corregidor Inn to take our breakfast and prepare for check-out.

Corregidor Island Lighthouse is also one of the attractions you wouldn’t wanna miss. We took our lunch at a restaurant located near the lighthouse.

You could opt to dine in an open area but fancy hall or go to the side garden where tables are waiting for you to eat al fresco style. The lighthouse, however, was closed for visitors and people are not allowed to go inside or climb up.

In this area, you will also find souvenir shops where you can buy an item you can take home to remember your visit to Corregidor.

Corregidor Island tour is definitely a must-do when you visit and having an overnight experience at the island could get you more curious about the history of the Philippines and how the war took place on the island. To learn more about tours and packages in Corregidor Island, please visit the links below.

A. From South
– Ride LRT 1 from Baclaran to Buendia/ Sen. Gil Puyat Avenue
– Ride Multi cab going to SM MOA
– Get off when you reach One Esplanade
– Walk going to Esplanade Seaside Terminal (EST)

B. From North
– Ride LRT 1 from Roosevelt, Balintawak or Monumento to Buendia/ Sen. Gil Puyat Avenue
– Ride Multi cab going to SM MOA
– Get off when you reach One Esplanade
– Walk going to Esplanade Seaside Terminal (EST) 7 Questions To Ask Yourself Before You Relocate To A New...