The Jerny – Travel and Inspirations
Japan

Our last day for our trip in Japan is finally coming to our senses. We all know we shouldn’t miss Fushimi Inari Shrine and if we push all ourselves to explore it in the day, I’m sure we’ll just fail or we’ll get burnt out early. So later that night, we all decided to do a bike adventure and tour to the famous Fushimi Inari Taisha. 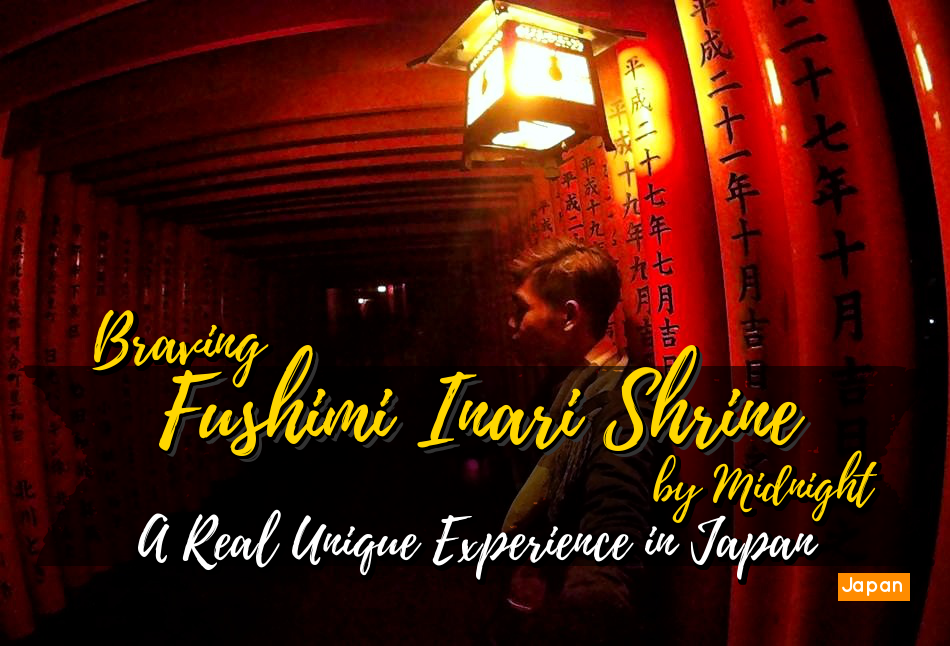 Emil, whom at the time, didn’t know how to use or balance himself on a bike was forced to learn in a very little time. We were glad for him because he got to learn the skill in Japan! Achievement Unlocked indeed! Oh, and yes, we did a bike tour from Ginkakuji to Fushimi Inari Taisha!

It was already about 1 am when we departed from our Airbnb Hostel. We took only one pocket wifi and 4 bikes, each for us. The only navigation we had was from Google Map. Unfortunately, the map gave us a longer route going to the shrine and it took us about 2 hours before we got to the spot. Unfamiliar with the place, we took that longer route. There’s really nothing much to see on the streets of Japan during the night but you’ll definitely be amazed by how peacefully looking Kyoto is at night time.

In the middle of our bike trip, a police mobile came close by. We thought that Kim, who had been biking fast and outside the biking lane, was about to be questioned as to why she was biking outside the specified lane. Frani, who slowed down from biking went a little nervous about that small police mobile act. Luckily, the officer probably just looked at us and wondered what were we doing and why are we biking in the dark of the night. Phew!

After roughly 1 hour and a half, we are so close to Fushimi Inari. We passed by many schools, houses, the Gion District, stores, dark streets, we even went through a small alley under the bridge just to get to the other side of the street. We also crossed a train railing and the good thing was, that crossroad was open. We passed by an unknown street and everything was new to us. It was also drizzling so we’re sort of wet when we arrived in Fushimi Inari. It was cold, very cold, that we didn’t get to perspire so much from all those biking we’ve done. 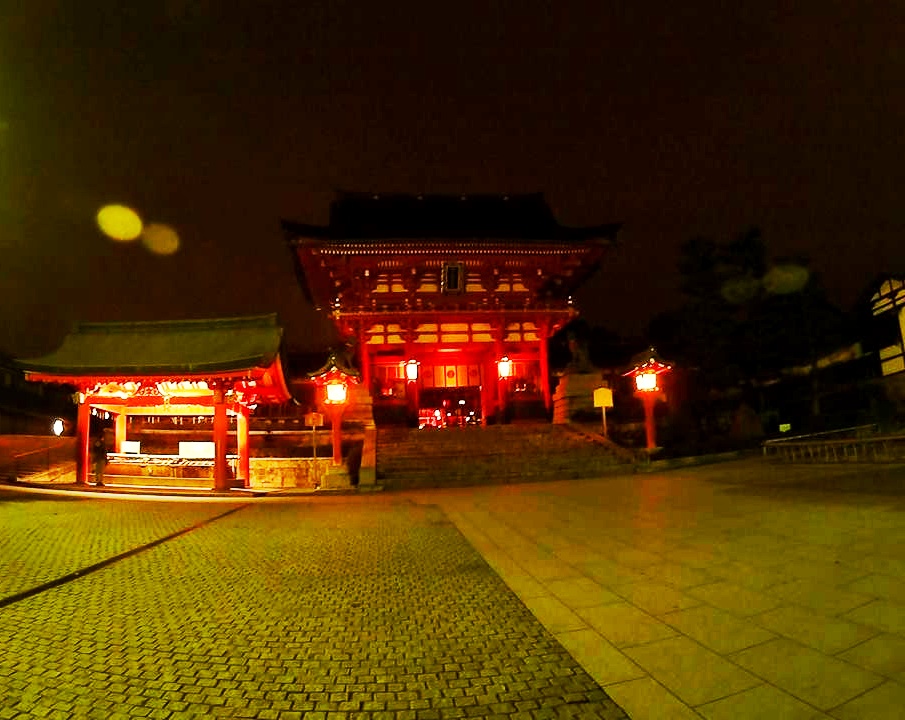 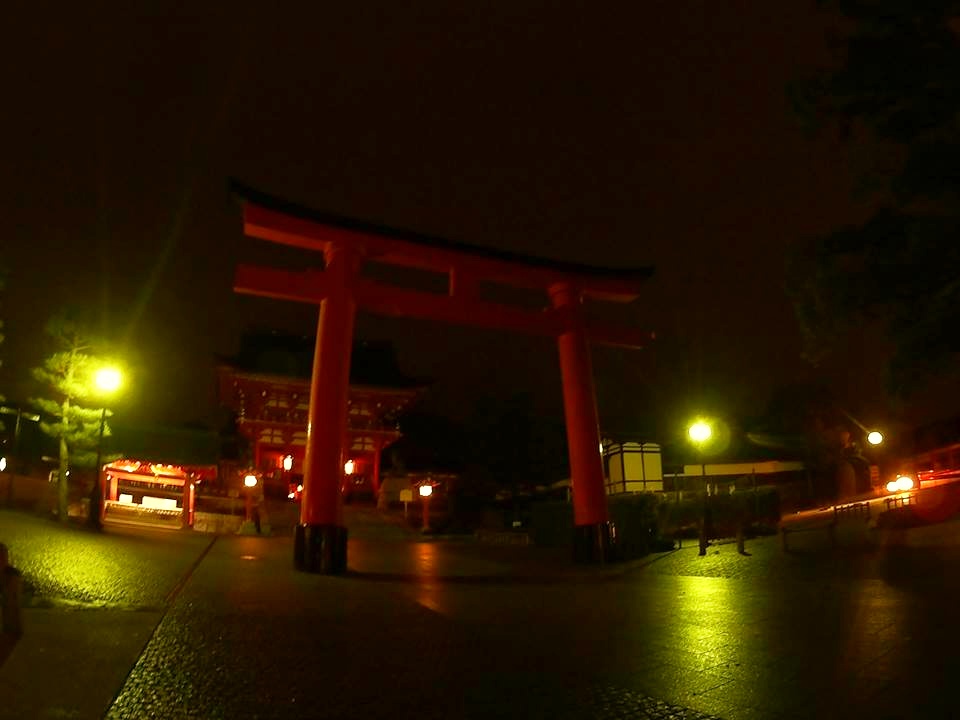 Alas, we arrived! The shrine was empty. Nobody was there except us. A different kind of feeling. Like we’re the only people in the world and that we were welcome by Inari, but at night. It was dim, there were lights, but they are not enough to illuminate everything.

Fushimi Inari – Taisha, is the head shrine of Inari. The shrine sits at the base of a mountain which is 233 meters above sea level and includes trails up the mountain to many smaller shrines which span 4 kilometres and takes approximately 2 hours to walk up, but we were there for just an hour only.

Exploring the Fushimi Inari at night is a little creepy. I get to drink a few cups of spring water from the water basin inside the shrine. Make sure to follow the rules on drinking the water as you are not the only who had used or will be using the cup! The structures were amazing! The torii gates seem to be a door to another dimension. Imagine a thousand torii gates are waiting for us to bring us to another world. 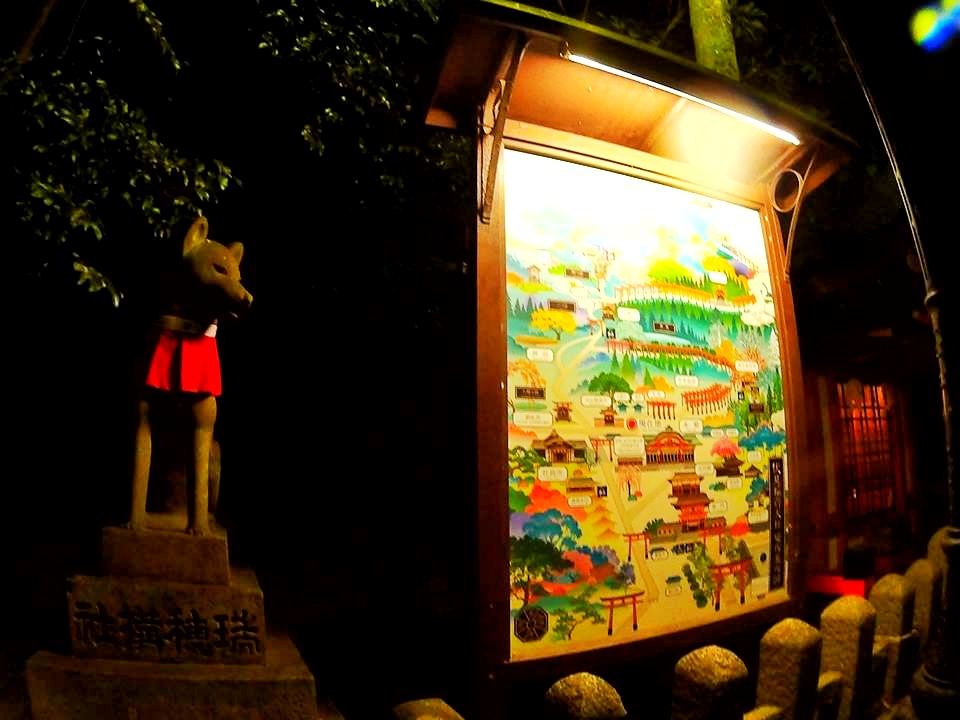 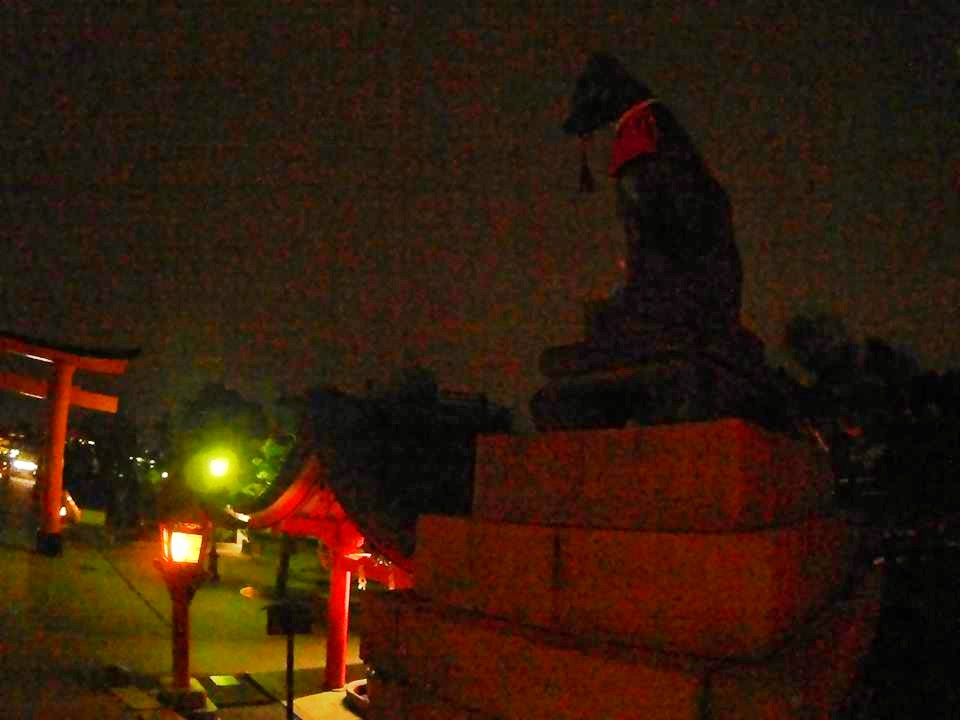 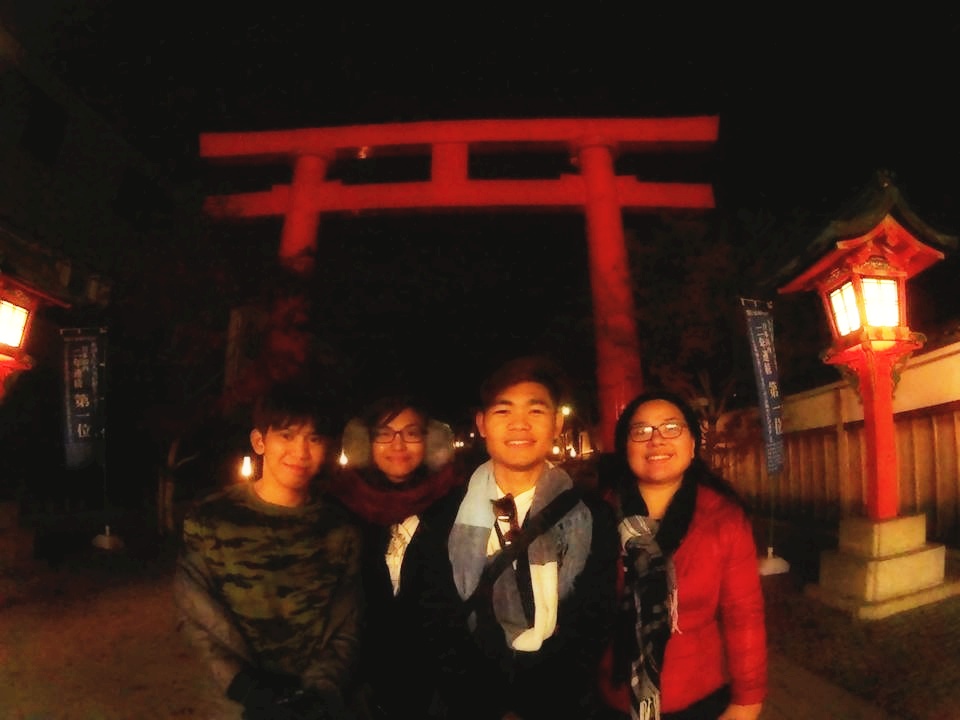 Fox structures are also everywhere. Foxes in Japan are often regarded as messengers and mostly are seen in Inari shrines with a rice granary in their mouths. This what creeped my friends out. I still remember, they think that those foxes are looking at us, manning our every move.

As we walk along the middle of the torii gates, the creep factor goes up. If I remembered it right, I assured everyone not to creep out as we go deeper the shrine’s torii gates. As we walk further, it goes darker. Some of the lights were not functioning, thus, only little lights are illuminating the scene. Our phones flashlights aren’t good as well. 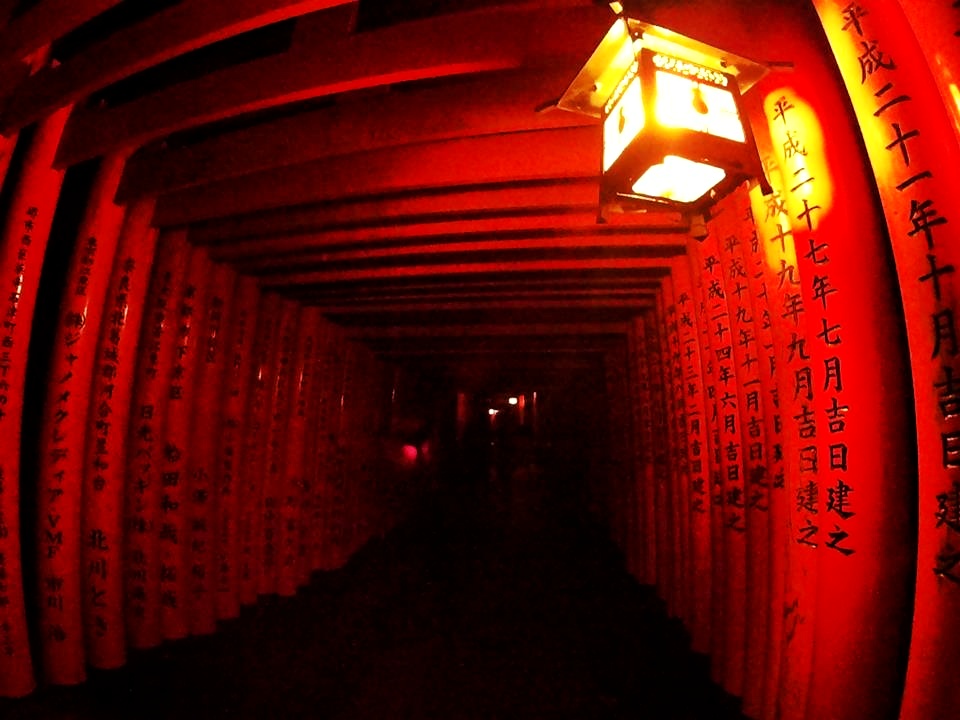 With this creep factor on their mind, we decided to go back to the main entrance and hit the other side of the shrine. We went on the torii gates located in the right portion of the shrine earlier, now we’re going the other way. However, they have decided not to go far anymore so we weren’t able to check the scenery further afar. And we were there in between 2:30 am until 3:30 am.

You know the feeling when it’s too dark and you think that somebody’s looking at you in every direction. We were even joking that those foxes may come to life and instantly show in front of us or just like what we see in anime where foxes are the spirits and guardians of the Fushimi Inari Shrine. 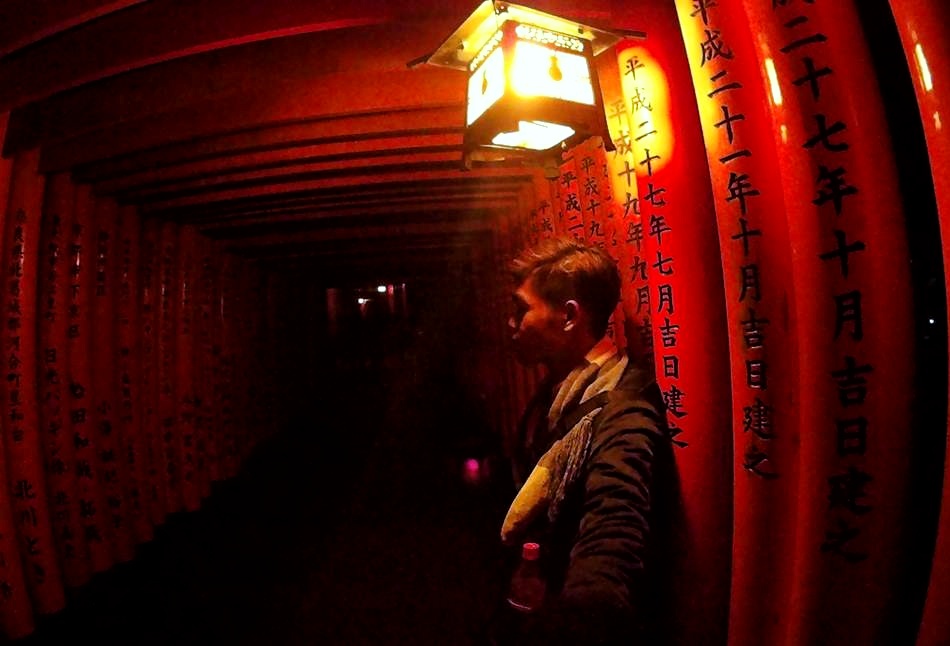 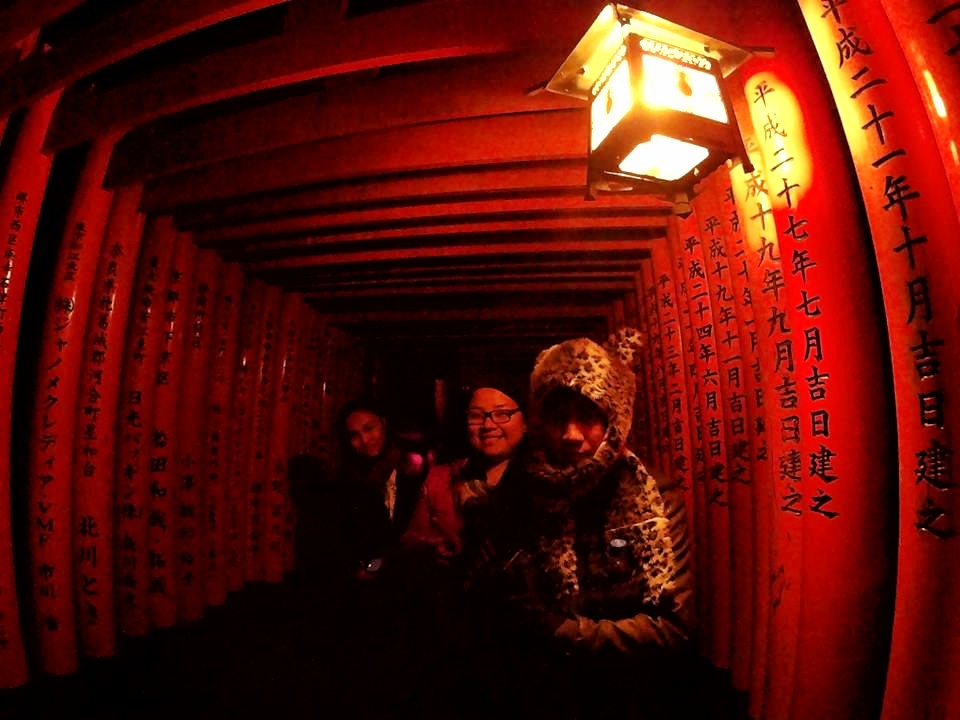 After about an hour, it was still drizzling and we felt exhausted. We know we still need to go back to our Airbnb hostel to catch some sleep because we have to take a look at Kinkaku-Ji Temple, Arashiyama Bamboo Forest, and if time permits, Nara Deer Park. Surprisingly, biking was way faster going back to our place and that was an epic and unique experience. 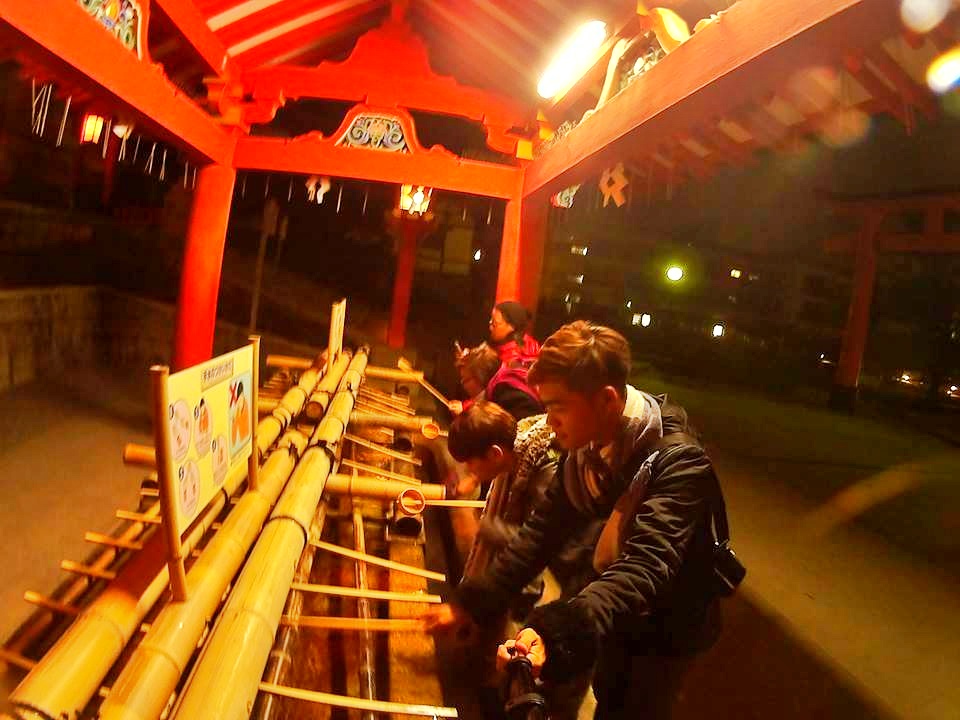 That’s how it felt like when we went on a bike adventure in Kyoto going to Fushimi Inari Shrine. I suggest you try it too! You’d get to see more scenery and new things while on a bike!

Quality of the photos were bad, sorry!

Get your Japan visa now!
A Must Visit Temple: Kinkaku-ji Temple
7 Most Recommended Rides in Universal Studios Japan!

Get your accommodation on Kyoto near Fushimi Inari Shrine! 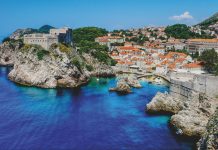 Sapporo Ninja Experience via KKday: Must-try Activity When in Sapporo

Sunday Buffet at D’ Banquet Bakeshop and Restaurant for only P599

Cabanas Dine and Bar | Newest ‘Where to Go’ in Tagaytay